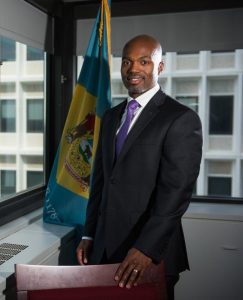 Kristopher Knight serves as Chief Deputy Secretary of State and Director of the Delaware Division of Corporations. In his role, he oversees the state’s $1.6 billion corporate franchise and servicing of the 1.6 million business entities that make their legal home in Delaware. Mr. Knight also supervises several other divisions of the Delaware Department of State, including the Office of the State Bank Commissioner, the state’s Corporate and International Development office, and Delaware’s abandoned property Voluntary Disclosure Agreement program. Since 2012, he has also served as treasurer of the Delaware Sustainable Energy Utility’s Board of Directors. There he led a comprehensive overhaul of the utility’s financial policies and practices. Mr. Knight also serves on the Governmental Accounting Board (GASB), an independent, private-sector organization based in Norwalk, Connecticut, that establishes accounting and financial reporting standards for U.S. state and local governments that follow Generally Accepted Accounting Principles (GAAP).

Previously, Mr. Knight served as the director of Delaware’s Division of Accounting at the Delaware Department of Finance. In that role, he administered policy related to the state’s procurement card program, which has an $80 million annual budget. Prior to his career in public service, Mr. Knight served in positions of increasing responsibility at KPMG LLP for more than a decade. As senior audit manager, he managed all aspects of governmental client audits, including those for the University of Delaware, the State of Delaware, and Philadelphia Gas Works.

Mr. Knight holds a bachelor’s degree in Business Administration from Loyola University. He is a certified public accountant and a member of the AICPA.